Presentation from the Fundación Ignacio Larramendi 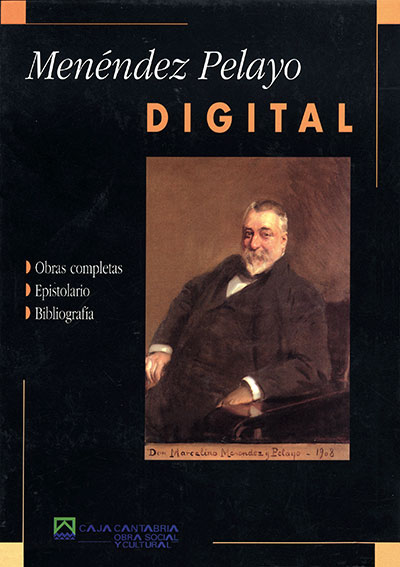 It was ten years ago that Ignacio Hernando de Larramendi y Montiano, whose work I am trying to continue from the presidency of the Foundation that bears his name, originated the implementation of the digital edition of the complete works of Menéndez Pelayo, along with his collection of letters and an extensive bibliography on the work of the polygraph from the Santander region, so that access to such a vast production could be provided from a single disc and that, in addition, the free text could be consulted, which is a very important feature for researchers and scholars in general.

Now, in keeping with the times, the Ignacio Larramendi Foundation and DIGIBIS, the company that he also created to implement his projects in the field of digital editions, publish a new version on his website, integrated into FHL Virtual Libraries, of theMenéndez Pelayo Digitalversion that adds,  to those of the disc, some functionalities that DIGIBIS has developed recently.

Within the activities promoted by Ignacio Hernando de Larramendi, it is necessary, in order to understand the current project, to go back to a broad set of initiatives that were carried out from the MAPFRE America Foundation. Perhaps the most well known is the editorial work that led to the MAPRE 1492 Collections. But all the projects undertaken in the field of digitization were also very important and, in particular, the Tavera Classics Collection, promoted in the first place by the Tavera Institute and subsequently by the Tavera Foundation, heir to a certain extent of the MAPFRE -America Foundation.

After the above-mentioned initiatives, taking a step forward and using new IT techniques, the aforementionedMenéndez Pelayo Digital saw the light of day and, by extension, the last of his very ambitious projects, FHL Virtual Libraries, of which the above-mentioned disc was the first result, as was also the creation of the DIGIBIS company, heir of that precursor DIGIMAP.

In the first few years they produced digital editions of important polygraphs such asGregorio Mayans digital, Andrés Bello digital, Luis Vives digital, Juan Valera digital,but later saw the need to carry out a methodological change that would take into account the multiplication in the network of digital resources that coincided with the objectives that were defined in the first edition of the bookFHL Virtual Libraries.

As the circumstances of the creation by DIGIBIS of a wide range of virtual and digital libraries also occurred, which were state, community, municipal or private; it was possible to unite both initiatives and create this new Ignacio Larramendi Virtual Library of polygraphs, the flagship of both projects and initiatives of the Foundation as well as for the developments and productions of the company.

As could not be otherwise, the first result, the most complete of all until now, it is the on-line edition ofMenéndez Pelayo digital, with the extensive set of features, developments, data and metadata that are characteristic of virtual libraries produced by DIGIBIS, which will give maximum visibility and accessibility on the Internet to the books and writings of Marcelino Menéndez Pelayo.

It will also do this with those authors or polygraphs, which we will number in the almost magical figure of 777, which make up the legacy of critical thinking from Seneca to Zubiri, and the inseparable manifestations of twinned thought from Portugal, Brazil and Latin America. In this way the maximum possible representation of the cultural contribution of that well-ordered group of nations in the network of networks that collects thought in the 21st century will be achieved.