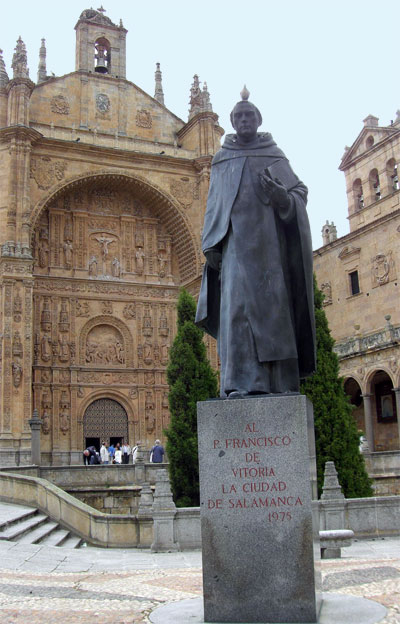 I am pleased to participate in the presentation of this Virtual Library of the School of Salamanca, which combines, in the right combination, erudition and new technologies, and which is the first stage in materialising one of the great unfinished projects of Ignacio Hernando de Larramendi, MAPFRE's chief executive for many years, and creator of the Foundation that bears his name.

The MAPFRE FOUNDATION is very pleased to be able to contribute to this project, not only in recognition of the enormous work carried out by Ignacio Hernando de Larramendi at MAPFRE, under the aegis of which the MAPFRE FOUNDATION was created,  but above all because of the project's extraordinary interest in itself, which involves applying the most advanced computer and communications technologies to the noble objective of making the historical heritage of Spanish thought accessible through the Internet, as well as its interrelationships with contemporary thought and, above all, with the foundations on which modernity was built.

As a jurist, I feel especially identified with much of the work of the authors of the Salamanca School. For many years it has been beyond doubt that those Dominicans and Franciscans who gave lessons in the Convent of San Esteban in Salamanca, and who wrote so profusely, constitute the basis on which International Law was created, the then called Law of Peoples; and how the writings of some eminent Jesuits could be filtered into the vast majority of 17th-century European writers, and even clearly translated into the U.S. Declaration of Independence, almost certainly through John Locke.

The School of Salamanca also played an essential role in the development of economic theory, as Joseph Schumpeter demonstrated and was later popularised by Marjorie Grice-Hutchinson. Indeed, a large part of economic theory had to explain the effects of the enormous arrival in Europe of huge quantities of precious metals, with which currency was minted almost instantly. The Casa de Contratación de Sevilla was not only a very powerful administrative instrument, but also a real university where we would obtain what we would call today a Master on Business Administration (MBA).

The title of Tomás de Mercado's great work, Suma de tratos y contratos (in its first edition Tratos y contratos de mercaderes y tratantes), written at the request and commissioned by the merchants of Seville, is indisputable proof of this. The same can be said of Martin de Azpilicueta's Comentario resolutorio de cambios, the forerunner of the quantitative theory of money, which particularly dealt with the economic effects of the arrival of precious materials from America.

As a professional who has dedicated his entire life to insurance and MAPFRE, I am pleased to recall that the School of Salamanca also took care of insurance, as important as one might imagine when the transfer of goods from Seville to America, as well as the return trip, was so fraught with anxiety, as Jesús Huerta de Soto has well remembered; not to mention the Manila Galleon, also known as the Acapulco Galleon, a name that, as is known, was the name given to Spanish ships carrying goods between Manila and the ports of New Spain, traffic that began in 1565. It was, without a doubt, the birth of a fully global economy.

The legal, historical, theological and economic analysis of all these transformations of the world carried out by Spain was the object of attention by the most important Spanish intellectuals, and from their studies and academic disputes emerged a set of ideas emerged that unfortunately did not come to fruition in Spain, since little by little Spanish decadence prevented these analyses from continuing to be contrasted and applied. However, their works, some written in Spanish and others written in Latin, were studied meticulously, for example, in all the universities, and it is surprising to see to what extent the works of Francisco Suárez were part of the curriculum, both in Catholic and Protestant territories.

I do not think it is necessary to highlight the extraordinary opportunity for these events to be remembered now and for these ideas to be put into value, at a time when the Spanish-speaking community exceeds 500 million people and the Portuguese-speaking community is approaching this figure, and the role that the Ibero-American nations must play in the 21st century is increasing.

The MAPFRE FOUNDATION is very proud to collaborate in this project, whose future continuity is assured by the high technological level achieved by the Ignacio Larramendi Foundation and its virtual libraries, and by the computer developments carried out by its subsidiary company DIGIBIS.